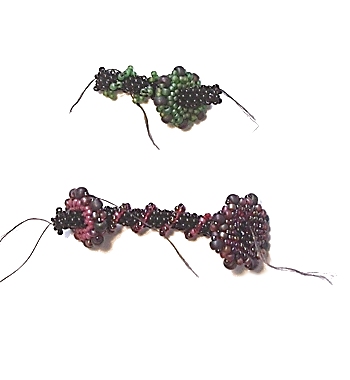 In December 2002 I was contacted by Jill Devon, owner of The Bead Merchant and joint editor of the Beadworkers Guild series of books, along with Liz Thornton. She asked if I could help by contributing a project for their new necklace book, and informed me that they wanted finished projects in by the end of January!

I said I'd love to help and asked if there was anything in particular she was looking for. When she got back to me and mentioned that in the ropes section of the book she wanted a lariat, ideally in peyote stitch, with rings on it getting fatter by using bigger beads, with the rope embellished with peyote stitch and the whole thing joined by a toggle- I knew just where to turn!

I went straight back to my samples and dug my beads and thread out and got to work.

Sample five:
For this sample I used the same beads as before, as I knew these worked- I wasn't brave enough yet to try it with different beads! The extra step I added was trying to embellish the rope. This I did by weaving diagonally though base beads in the rope and adding a row of ‘netting' in co-ordinating beads.

Sample six:
Once I was happy with the look I knew I'd have to take the plunge and try it with different beads- after all not everyone was going to have the same beads I did so it needed to work with whatever people had. I then beaded this sample using different beads and added a second ‘bobble' with more rows to give a different sized bead.

Now all I needed to do was try and describe how on earth you beaded it!