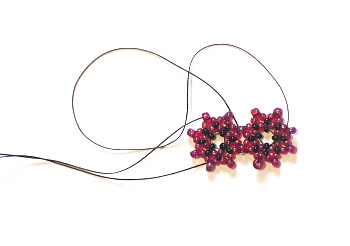 From beading my Peyote Bobbles Necklace With Flat Centrepiece, I was intrigued with the idea of using the same technique but as a flat piece, which is full circle as the original Peyote Bobbles idea grew out of not wanting something flat!

I had already done a flat piece that was large so wanted to change the scale again and do something small. So I returned to my individual beaded beads and beaded some flat motif pieces using the same rows as ones of the beaded beads, the one in the bottom right of the picture.

I realised that small flat pieces needed to be joined to make a finished piece and so did a sample where I used beads from a previous motif to finish a second one, thereby joining them.

Once I knew this worked I wanted to make a finished piece from the idea.