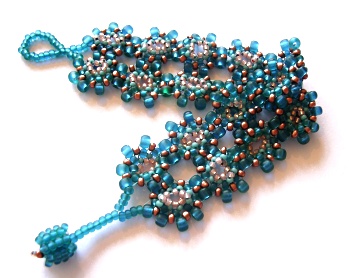 This bracelet forms part of my Honeycomb Beadwork series and was the first finished piece made after I revised the design so that the motifs could be joined in all directions.

The original design I had worked on made six-sided motifs that looked like honeycomb, hence the name, but they could not join in the ways I wanted them to.

Once I realised that the motifs needed to be four or eight-sided to sit how I wanted them to, I started from scratch and re-developed the motifs, adding two more sides but keeping the original technique and design as intact as possible. The first result was this bracelet and as I beaded it I realised that I could also return to my original idea and make 3d shapes.

Instructions for this piece are contained within my Honeycomb Beadwork instructions.