Resin Or No Resin 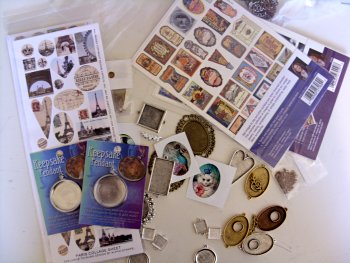 My supplies all ready to go 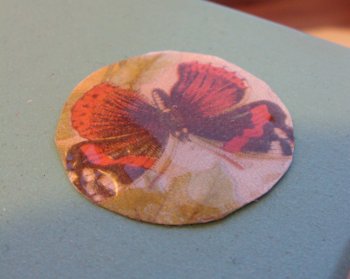 My test picture coated in Magic-Glos 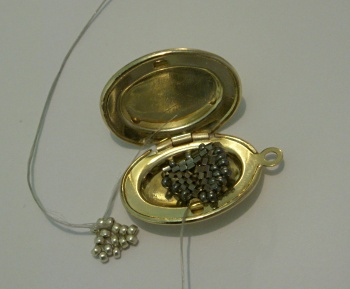 Some of my beadwork experiments

Ever since coming back from New York I have been itching to get on with playing round with resin.

This was partly sparked by some of the frames and transfers/ images I bought at Beads By Blanche and partly by what I wanted to do with the locket I need to decorate.

I knew I had some UV curing "resin"- Magic Glos-  that I bought from Lisa Pavelka last year and decided to use it to embed some beadwork inside the locket and also to use it to add images into one of my frames.

So I got out all my equpiment and supplies (finding lots more frames and transfers etc I have bought over the years whilst I was at it) and found the Magic Glos.

The bottle that had been opened in the class was solid- absolutely unusable.

Okay I thought, I have another unopened bottle which I can use.

But that too seemed solid.

I began to panic and opened it up- fortunately there was a small amount still liquid (well, almost, it barely flowed) so I reasoned that I could use this to experiment on my pictures and see if they needed sealing before I used one in an actual piece. I also figured that I would only need a small amount in my locket so I should be fine...

I placed some Magic-Glo on a picture and plugged in my UV light.

Can you guess what happened next?

Well, despite never being used before the light wouldn't turn on!

Okay- now all I needed was to leave the "resin" in sunlight and it woul still cure. Except this is England in the winter - there is no sunlight.

At the time of typing the piece has been curing for over 24 hours and is still liquid. But on the plus side the glos has had time to settle and spread over the picture.

There was no way I could cure it in daylight.

So what to do?

I tried to buy a UV light- no luck.

I considered liquid polymer clay. No luck, I was advised it wouldn't be clear when dry which would mean it was useless.

How about just gluing some beadwork in?

I decided to sleep on that issue and instead concentrated on making the beadwork to go inside.

A few experiments later and simply put I just didn't like it.

The inner part of the locket was so small it woul be hard to bead anything "meaningful" and anything else just looked messy.

I decided this project was telling me it wasn't going to work and decided to leave it for the day and instead concentrate on something useful- finally finishing my knitting to keep me warm in Helsinki next weekend when the weather is predicted to reach -14!