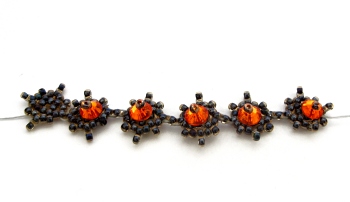 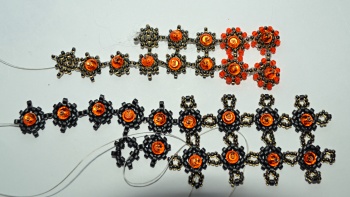 My Jaipur Jewels series of work began back in February 2011 when I wanted to bead something that used a simple motif which could be replicated throughout a piece and embellished if wanted.

The idea has been brewing in my mind for many years before I finally put beads to thread and it took me a few attempts to work out how I could bead the motifs joined to one another rather than have to make them separately and join then afterwards.

My first attempt used just the beads I happened to have on my mat- size 11 cylinder beads and size 15 seed beads (I was trying to challenge myself!) and fortunately it worked.

It took until I beaded my second piece for me to add a different embellishment on the second side rather than leave it blank as originally intended.

Instructions for all of these can be purchased here.