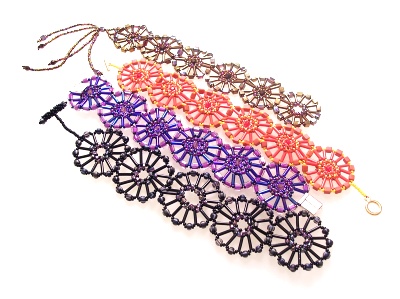 These bracelets form the finished items in my Cubed Flowers series. They came about after experimenting with a stitch and playing with bead shapes and sizes to form motifs.

From the top;
The first bracelet:
this is the original bracelet in the series. It uses the same beads as the last samples and is fastened using strands of beads threaded through the empty centre of one of the joined motifs.

The second bracelet:
after beading the first bracelet I realised that the fastening was quite complicated to describe and having two different types of motifs, some with centres and one without, may make any instructions longer and more complicated than necessary. So I decided to re-bead the bracelet and to add a clasp that anyone would be able to get hold of. I also wanted to check that the technique would work with different beads and as you can see with the samples the design needed some adaptation.

The third bracelet:
This is where I tested out the new design and saw that it worked with different beads. I also tried using a different type of clasp, one that would be more a part of the motifs and would therefore mean the end ones would have to be beaded with the clasps as part of them. I was pleased that the design worked and like the look of the clasp.

The fourth bracelet:
I wanted again to try using a beaded fastening to close the bracelet so decided to bead another variation. I realised that for the fastening to work I would have to return to the original motif which didn't have a centre and see if a bracelet of these would work. I was pleased with the result, as it looks quite different to the other bracelets, with an airier, spikier and more architectural look to it.

One of these bracelets was published in the April 2007 issue of Bead and Button and full instructions for them are now available here.