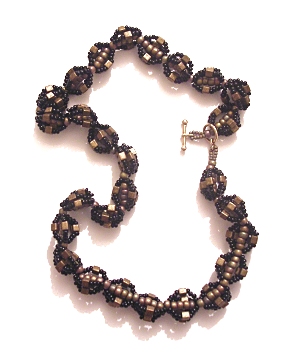 My Caged Beads series, sometimes called 'Spiralling on the spot' developed as a variation of spiral rope.

I originally called it Caged Beads as I felt the bars, or outer spirals, I was adding, were caging the central beads.

However as I was explaining it to a beader one day she was struggling with how it was done. Then she looked at it and had a light-bulb moment proclaiming 'It's spiralling on the spot!'

It's a great quick and easy technique which is open to lots of variation.