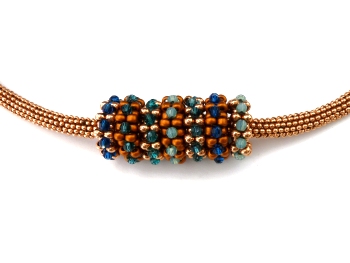 The beaded beads threaded onto the copper rope 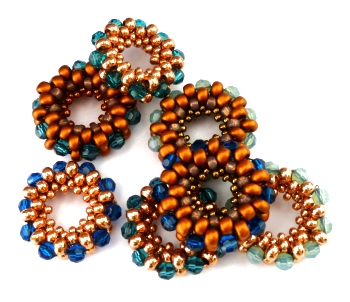 This has been a busy week for me with lots of ups and downs.

Ok, that's only one down but it's a pretty major one.

It's been on the way out for months (I had to plug in another keyboard to use it as half the keys on the old one had died and I had to keep it balanced on some books as the fan didn't work properly and it kept overheating and shutting down). I am now such a technophobe that I was trying to resist replacing it for as long as I could until it just stopped working the other day- cue major panic!

Fortunately a techy whizz worked out that all my info etc was safe (lesson learnt- I must learn to back-up) and then it was just a matter of buying a new laptop.

I of course delegated the choosing of a laptop as I would base my decision on whether or not I liked the colour of the lid, and now I am sat trying desperately to get used to its newness and all the differences from my old one. I don't do change well!

Anyway, in the meantime I have been getting on with beading my latest project when I can.

I am still using Fireline and slowing growing to like it. I mastered adding a new thread no problem but I'm still having problems with it being slippy and tirng my hands. But, based on the feedback I've had on my Facebook page, this may be solved if I use a different size so I will experiment with that when I get the chance.

I have changed some of the colours I used in the beaded beads to make them lighter which works better in photos.

I don't do change well so a new phone, laptop and thread all in one week has left me worn out!